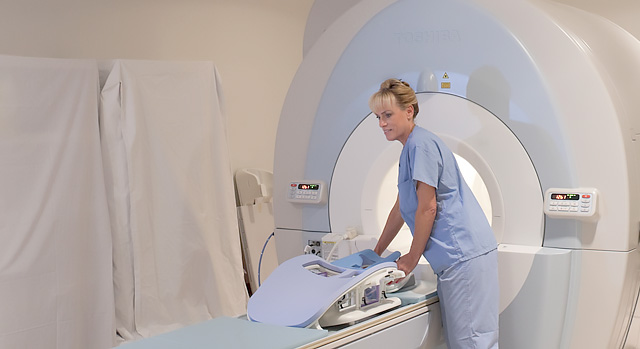 Centennial Hills Hospital offers diagnostic imaging for early detection, diagnosis, and treatment of breast cancer, as well as services for those at high risk for breast cancer.  Patients have access to a wide range of breast imaging techniques and minimally invasive techniques used to perform breast biopsies. Oncologists will develop an individualized plan of care for women with breast cancer, which may include a combination of radiation, medication and/or surgery. Surgical procedures range from breast conserving treatments such as a lumpectomy to simple and modified radical mastectomies. Sentinel node mapping is offered to eligible patients so that a full lymph node dissection may not be necessary. If a mastectomy is required,  women are referred to our plastic surgeons to discuss their reconstruction options.
Visit our Breast Care Center to learn about breast cancer diagnosis >

Centennial Hills doctors screen for colorectal cancer using colonoscopy or flexible sigmoidoscopy. In both of these procedures, the physician can both screen for colon polpys and remove them. Polyps are small growths that can become cancerious over time. Cancers found in an early stage, while they are small and before they have spread, are more easily treated. Nine out of 10 people whose colon cancer is discovered early will be alive five years later, according to The American Cancer Society. And many will live a normal life span. During colonoscopy, the physician will look inside of the entire colon and rectum for polyps, which are small growths that can grow to become cancerous over time.  A colonoscope — a thin, flexible, hollow and lighted tube that has a tiny video camera —is gently eased into the colon while you are under anesthesia; the camera sends pictures to a monitor that is viewed by the physician. Polyps can be removed during this procedure. If the cancer has spread, Centennial Hills Hospital surgeons can discuss your surgical options with you.

Early detection is critical when it comes to reproductive-system cancers, such as cervical cancer, endometrial cancer and ovarian cancer. Although cervical cancer is often diagnosed early with a Pap smear, endometrial and ovarian cancer are more difficult to detect. Women may be diagnosed at later stages with these cancers. Deciding on the best treatments, whether surgery, chemotherapy, radiation or a combination of these, is an individual decision that should be made with your doctor and be based on your preferences.
Learn about robotic gynecologic surgery >

Hodgkin disease is a type of lymphoma, which is cancer of the part of the immune system called the lymph system. The first sign of Hodgkin lymphoma is often an enlarged lymph node or nodes in the neck, armpits or groin. The disease may spread to the liver, lungs, or bone marrow. The earlier the disease is caught and treated, the better chance people have of living a normal lifespan. Doctors use a physical exam and medical history, blood tests, and a biopsy to diagnose Hodgkin disease. Treatment depends on how far the disease has spread and often includes radiation therapy or chemotherapy. In many cases, the disease can be cured entirely.

Non-Hodgkin lymphoma (NHL) is cancer of the lymph tissue, which is found in the lymph nodes and other organs of the immune system. Lymphomas may develop in people with weakened immune systems due to organ transplanation or another condition such as HIV infection. The cancer may grow slowly or quickly. Treatment depends on the grade of the cancer: low, medium or high grade (the fastest growing). Treatment may involve chemotherapy, radiation therapy or both. Some people with the slow growing form may not require any immediate treatment. Some people, however, who have failed earlier treatments or experienced a remission in their disease may require high-dose chemotherapy followed by an autologous stem cell transplant (use of one's own cells).

The prostate is the gland that produces fluid for semen in a man. Prostate cancer generally affects men 40 and above. Men at highest risk of prostate cancer include those with a family history of the disease, men older than 65, and African American men. Symptoms of prostate cancer may include low back pain, pain with ejaculation and difficulty with urination. Doctors generally diagnose prostate cancer by doing a digital rectal exam to feel the prostate for lumps; they also will likely take blood for a prostate-specific antigen (PSA) test. These tests are also used to screen for prostate cancer in men who have no symptoms. Abnormal results do not necessarily mean a man has prostate cancer. Follow up tests are required and may involve ultrasound, MRI or a biopsy. Treatment for prostate cancer will depend on the stage of the cancer and the age of the patient. Treatment is an individual decision made in concert with your doctor.  Options may include one or more of the following, alone or in combination: surgery, radiation therapy, hormone therapy, chemotherapy and watchful waiting, in which the cancer is monitored.
Learn about robotic prostate surgery >

If you are having a medical emergency, call 9-1-1. Refresh your screen to get the latest wait time. For the most accurate wait time, call the hospital.