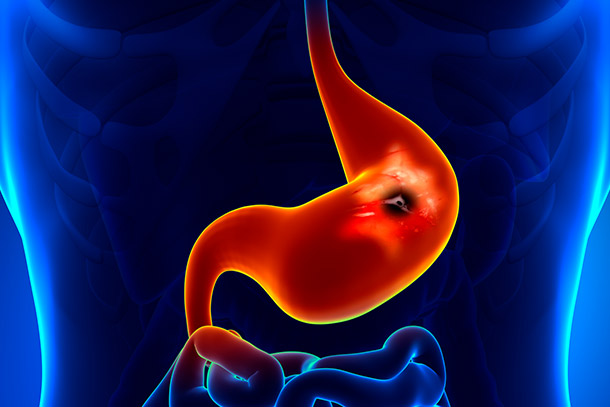 Gastroenterology focuses on the causes, prevention, diagnosis and treatment of diseases of the digestive system. The organs of the digestive system include the esophagus, stomach, small intestine, colon and rectum, pancreas, gallbladder and bile ducts. Centennial Hills Hospital Medical Center gastroenterologists evaluate the following signs and symptoms to find their root cause:

To make an appointment with a gastroenterologist affiliated with Centennial Hills Hospital Medical Center, contact our free physician referral service at 702-388-4888.

Diagnosing your symptoms is the first step to obtaining successful treatment. A Centennial Hills Hospital gastroenterologist may do a combination of the following: review your medical history, conduct a physical exam and order lab tests. Among the tests conducted may be:

GERD, also known as Acid Reflux Disease, affects millions of Americans. GERD occurs when stomach acids or intestinal bile leak back from the stomach into the esophagus (the tube that runs from the mouth to the stomach), a process called gastroesophageal reflux. Reflux can irritate the esophagus, and cause heartburn and other symptoms, and can damage the esophagus.

Centennial Hills Hospital gastroenterologists screen for cancer using colonoscopy or flexible sigmoidoscopy. In both of these procedures, the physician can both screen for colon polyps and remove them. Polyps are small growths that can become cancerous over time. Removing polyps can help prevent colorectal cancer from ever starting. Cancers found in an early stage, while they are small and before they have spread, are more easily treated. Nine out of 10 people whose colon cancer is discovered early will be alive five years later, according to the American Cancer Society. And many will live a normal life span and possibly never be affected by cancer again.

Colonoscopy is a procedure used to look for precancerous, early cancerous or cancerous lesions in the colon. During colonoscopy, the physician will look inside of the entire colon and rectum for polyps, which are small growths that can grow to become cancerous over time.  A colonoscope — a thin, flexible, hollow and lighted tube that has a tiny video camera —is gently eased into the colon while you are under anesthesia; the camera sends pictures to a monitor that is viewed by the physician. Small amounts of air are puffed into the colon to keep it open and let the physician see clearly. The exam takes about 30 minutes and is painless due to the anesthesia.

Sometimes a doctor will perform sigmoidoscopy instead of a colonoscopy. In this procedure, a physician looks only at the lower part of the colon and the rectum for signs of cancer or polyps. Because the scope used is only about two feet long, the physician is able to see the entire rectum but less than half of the colon. The physician uses a thin, flexible, hollow, lighted tube that has a tiny video camera on the end called a sigmoidoscope. The sigmoidoscope is gently eased inside the colon while the patient is under anesthesia, and sends pictures to a monitor. Small amounts of air are puffed into the colon to keep it open and let the physician see clearly.

To evaluate symptoms of upper abdominal pain, nausea, vomiting or difficulty swallowing, your doctor may recommend upper endoscopy, which enables the physician to examine the lining of the upper gastrointestinal (GI) tract, which includes the esophagus, stomach and duodenum. This is the best test for finding the cause of bleeding from the upper GI tract. It's also more accurate than X-ray films for detecting inflammation, ulcers and tumors of the esophagus, stomach and duodenum. The physician uses a thin, flexible tube called an endoscope, which has its own lens and light source, and views the images on a video monitor.

A physician might use upper endoscopy to obtain a biopsy to distinguish between benign and malignant (cancerous) tissues. Biopsies are taken for many reasons, and your physician might order one even if he or she does not suspect cancer. For example, your physician might use a biopsy to test for Helicobacter pylori, the bacterium that causes ulcers. Upper endoscopy is also used to treat conditions of the upper gastrointestinal tract. The physician can pass instruments through the endoscope to directly treat many abnormalities — this will cause you little or no discomfort.

During ERCP, the physician will pass an endoscope through your mouth, esophagus and stomach into the small intestine. After the physician sees the common opening to the ducts from the liver and pancreas, he or she will pass a narrow plastic tube called a catheter through the endoscope and into the ducts. The physician will inject a dye into the pancreatic or biliary ducts and will take X-rays. This will enable him or her to visualize the problem and recommend treatment.