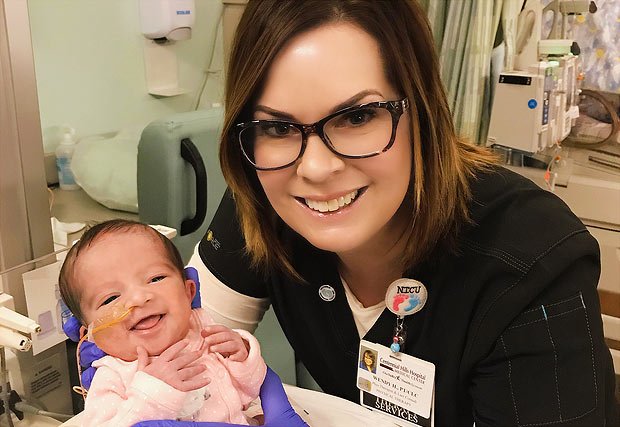 Tiny patients in the Neonatal Intensive Care Unit (NICU) at Centennial Hills Hospital will benefit from the expertise of physical therapist Wendy Hubbard-Alexandre, who earned the designation of Certified Neonatal Therapist (CNT) by the National Association of Neonatal Therapists on April 30, 2018, and specializes in the care of premature infants.

According to Wendy, pre-term and other high-risk infants who begin their lives in the NICU have higher rates of disability, which are often evident before the babies leave the hospital. “Early therapy interventions can make a positive, long-term impact,” explained Wendy. With her neonatal physical therapy skills, Wendy performs activities (interventions) targeting functional limitations, ensuring the baby has developmentally appropriate sensory and motor experiences, educating the family and medical staff and serving as an integral part of the NICU care team.

The Certified Neonatal Therapist designation is less than two years old. It was first announced in September 2016 and the application process became effective in November 2016.

Centennial Hills Hospital has offered neonatal intensive care services since 2009 and cared for its first set of triplets in June 2018.

Learn more about the NICU >

Get monthly updates with health news, recipes, and more